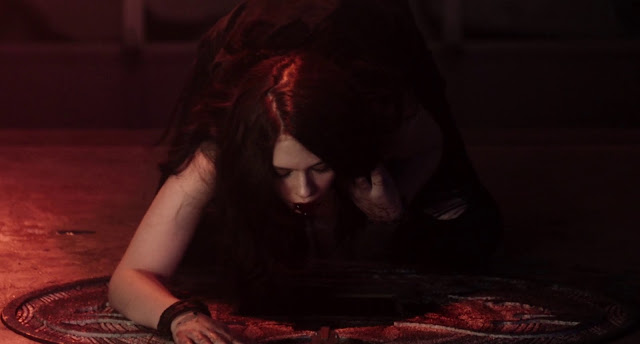 Bit (2019) is a competently shot movie, looking not much better than typical network TV.  Its plotting is conventional at worst and its dialog is adequate at best. But it's not really trying to be a showie indie horror flick. It's essentially a middle-of-the-road tale of a suburban high school graduate trying to find herself in L.A. The hook is that it centers on a gang of hip vampire women. It's all for kicks, and that's okay, because it provides a queer and female-focused power fantasy we could all use more of.

Nicole Maines stars as Laurel, the new girl in the big city and the newest member of the all-girl vampire squad. The film knows its audience well enough, and so doesn't patronize us by wasting time explaining Laurel's transness. It's implied on occasion when is comes up naturally, but little is made of it. Laurel is accepted without question. Bit firmly plants itself as film beyond the bleakness of the trans stories of the early 21st century and into a landscape where queer and trans stories are allowed to have fun.

It is a bummer that the film wasn't afforded more time or budget or defter hands. Laurel's relationship with her brother and her best friend from back home felt too much like the uninspired drama of a bland made-for-TV movie. Maines held her own, but the male cast wasn't quite up to snuff. Even the guy who plays Vlad wasn't able to muster the menacing charm essential for his Dracula role.

Bit is at its best when it focuses on the vampire squad and their feminist ethos. Duke (Diana Hopper), in particular, stands out as the leader and villain of the pack. Her dream of giving women power by making them vampires, but excluding men because of their inevitable corruption, is a tantalizing fantasy I haven't seen in vampire fiction before. Of course, Duke is just another authoritarian oppressor preaching 'individuality' for women as long as she's in control. She's an example of the villain with a cause that goes too far. Perhaps a more studied screenwriter could've added more nuance to her plight. Though the filmmakers know to end on a collective message, which I appreciate. With Vlad gone and Duke imprisoned, Laurel takes the lead. She basically warns her now vampire brother to check his privilege and vows to share her power. It ends with all the members of the squad consuming pieces of Vlad's heart, thus spreading the wealth.

It's not that Bit lacks polish. It's that it too often falls back on mediocre execution. That's not to say it doesn't offer some good times or performances. But I don't see it becoming much of a hit outside the LGBT or feminist horror fandom.