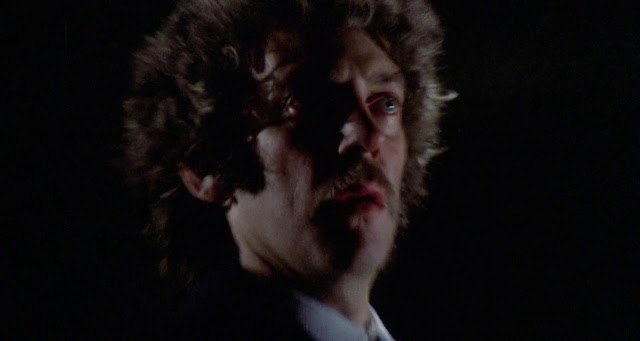 As demonstrated above, Donald Sutherland has one of those great horror movie faces that can pull off subtle despair as well as load terror. His pose at the end of Invasion of the Body Snatchers will never leave my memory, unfortunately. Years earlier though, he and Julie Christie pull off one of their better performances in Don't Look Now (1973). They play a married English couple (Laura and John Baxter) traumatized by loss of a child. The film begins with the death, so be prepared for that when you hit play. The majority of the story takes place in Venice, Italy. It's a work trip for the Baxters, but still serves as an escape from the tragedy at home... in theory. See, there's a killer on the prowl, possible ghostly sightings of their daughter, and ominous premonitions from witchy old women.

The spookiness isn't constantly front and center, but it frequently adds an underlying sense of supernatural danger. Director Nicolas Roeg makes excellent use of the cramped alleyways and winding waterways of Venice. Roeg's best trick is his way of cutting sequences. Quick flashbacks and juxtapositions are peppered through out, representative of the Baxter's traumatic memory, and echoing the film's interest in clairvoyance. The editing style is even put to good use in the film's once controversial sex scene. The rapid cuts between sex and getting dressed was supposedly done to please the censors at the time. Nevertheless, the glimpses of the Baxter's marital intimacies and mundane routines provide as a slice-of-live reprieve from an otherwise melancholic tale.

I'm glad the two older women did not turn out to be malevolent in the end. That one moment of them cackling was meant as a red-haring and was actually funny in hindsight. The blind one having prophetic powers, though, does seem cliche in 2021. The reveal of the serial killer has aged even more poorly, playing into the distasteful trope of the evil little person. What still works marvelously is the twist that John Baxter saw his own funeral boat without realizing it. It pays off and confirms the supernatural elements sewn throw out the story. It's an ending that may entice you to start again from the top.