Cops play music hoping to get videos struck down 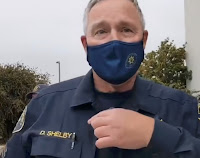 At a per-trial hearing for the former cop (Jason Fletcher) that killed Steven Taylor in a Walmart, the Anti-Police-Terror Project caught another cop brazenly trying to skirt accountability.

Protesters were merely exercising their rights to assemble. But when they started recording a confrontation with Deputy Shelby, he turned on some pop music, specifically of another Taylor: Taylor Swift (a perverse coincidence.) Without shame Shelby basically admitted his intent was to get the video struck down by a copyright claim. It didn't work and now the video has over 600K views.

In 2015 the Dover PD in Delaware went viral with a video of one their own singing a Taylor Swift song on patrol. With 45M views at the moment, I imagine they've been largely successful at spreading the image that cops are just like us. Forget that state violence, check out this officer sing in car! Now in 2021 this D. Shelby asshole is using Swift for more obviously sinister means. And he's not the only cop that's tried out this DMCA takedown technique. Earlier in the year, a Beverly Hills cop played Sublime to avoid being streamed. It's clear: the police will finagle they're way out of consequences. Shelby is apparently being investigated by internal affairs, but I bet he won't face more than some time-off.

For more footage of cops behaving like cops see this week's playlist: