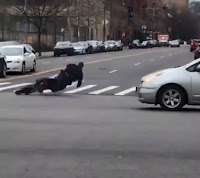 Cops aren't only reckless with their guns but also their cruisers. For example last week during a chase the Minneapolis Police crashed into and killer another innocent driver. The bystander was the uncle of Darnella Frazier, the young woman who filmed George Floyd's murder last summer.

Minneapolis police killed Darnella Frazier's uncle last night. She has posted about it on FB & shared the funding link: https://t.co/cDceChVQX5

This is why Pulitzer prizes etc nothing in the face of the police violence those who record interactions face directly & indirectly. pic.twitter.com/i9NxTkheV0

Though I could continue to write up a post about the scourge of cops on weekly basis, I think from now on, I'll present these stories in monthly intervals or so. I started this 'Cop Watch' series to shed light on the atrocities of the police, but it's becoming a tad overwhelming. I'm noticing that every other post here is about cops, and it just irks me to see these assholes plastered all over this blog. I will of course continue to discuss their brutality, but I also want to focus on other horrors as well media and cultural commentary. This blog is still in its experimental phase, so if you happen to be reading this, just know Dream Beam will be experiencing growing pains. Anyway, here's a cop making a fool of himself:

Alright everyone watch this video of a NYC cop trying to ride a motorbike they seized from some kid you’ve earned it pic.twitter.com/gSZIXrH6im

In other cop news: