Cop Watch: Police flips car over for a bit of speeding 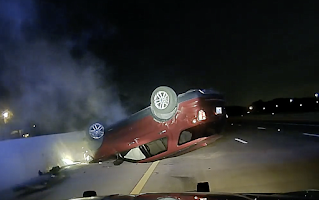 The henchmen of capital, otherwise known as the police, have been at war with the people, typically eyeing those of color and the poor, for a damn long time. But last year during the George Floyd protests, it seemed like this awareness became mainstream. People took to the streets and those who didn't, perhaps because of privilege and a raging pandemic, witnessed countless videos of police brutality on their screens. "Defund the Police" is now an acceptable idea for a lot more people, yet progress is moving slowly. To keep the pressure on within my corner of the internet, I'm beginning a "Cop Watch" segment, where I spotlight recent awfulness the police enact on the people.

In the latest: The Arkansas State Police is getting sued by a woman who's car was flipped over by a traffic cop. She was speeding 14 mph over the limit, apparently, and slowed down as the cop car approached. The shoulder was too narrow, so she turned on her emergency lights and waited for an exit to appear.  The traffic officer took that to mean she was fleeing. Or could it be that such an interpretation gave him the excuse to do the following? He engaged in a PIT maneuver meant to end high-speed car chases. The car flipped over. The woman was pregnant at the time.

The vile moment was recorded on the cop's dash cam:

There's no excuse from the cop here. Via the reporting, the driver had slowed down to about 60mph. She was not putting anyone else in danger. But that cop sure put people in danger. He's lucky he didn't kill her. There's no word on if the injuries terminated the woman's pregnancy, but I imagine there were complications. She did suffer severe bodily injuries.

Incidents like this could be prevented. Traffic cops or in a better world "traffic safety teams" needn't have to pull people over for minor violations. A simple warning from a megaphone should suffice. Some situations may entail mailing a ticket by looking up the license plate, like they do at toll gates.