But What About a Successor to Bound? 💋 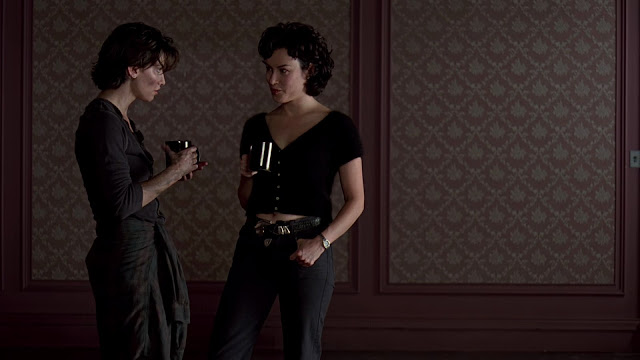 By my early teens the Matrix films had made their mark in pop culture. But they didn't quite speak to me back then. My young mind was certainly in awe of The Matrix's most obvious conceit: What if we're inside a simulation? Nowadays I can better appreciate its others ideas: escaping the facade of the status quo and its general angst against mundane corporate life (a coincidentally common narrative in 1999: see Fight Club and Office Space). It was the aesthetic of sunglasses, kung-fu, and guns that turned me off in the long term. I might have watched the 2003 sequels or at least parts of them. I don't remember much more that the highway action scene. They obviously didn't leave much of an impression. The critical consensus wasn't great either; so the the Wachowski's promptly went into my mental wastebasket soon after 2003.
In the years to come the Wachowski's output hardly caught my eyes. Speed Racer is an ADHD nightmare I've yet to complete. I do recall getting baked and then going to see Cloud Atlas in theaters with a then roomie. She and I really enjoyed it... But since then, I've been dreading a rewatch due to all the bad yellowface makeup. I tried getting into Sense8 some years ago and couldn't make it past the first clunky episodes. As for Jupiter Ascending... I've heard some intriguing things, so I intend to get to that one eventually.  (Update: I've since watched more of Sense8 and have seen the rest of their films. In short: I appreciate their ambition more than their execution.)
When I've been reminded of their directorial debut and queer cult-classic: Bound, I think, "Right, that shadowy lesbian movie they made before The Matrix. It can't be that great, can it?" Well, now that the fourth Matrix movie is about to drop, I've decided to rewind and finally watch Bound. And damn, I wish I had done so earlier. Solely on the basis of its filmmaking Bound is probably the best Wachowski film. As a queerdo myself, I'm embarrassed it has taking me this long to see it.

Bound was made before the Wachowski's transitioned and came out queer trans women. At the time it felt like an anomaly that such a well-done cinematic portrayal of a lesbian couple was helmed by two supposed brothers. In hindsight the film's themes have become much more personal to the sisters.

I kept thinking, "What do you guys, [the Wachowskis] know about being women? How did you write this thing?" And little did I know, at the time, they were really feeling something. They really were feeling bound up inside. So, it became that the metaphor had a deeper meaning. It wasn't like, "Oh, aren't they clever writers." I thought, "Wow, they were going through this, and the world didn't know."

At the time the siblings knew to bring in sex educator Susie Bright to consult on the production. She was particularly helpful in choreographing the sex scene between Tilly and Gershon. The hand is a sex organ, she told them. To add to its authenticity, it was shot in one sweeping take. It might just be the most visceral lesbian sex in mainstream cinema still, a triumph that, I've read, awakened many young queers. Today, I hope they would cast actual queer actors. Nevertheless, the chemistry of Tilly's Violet and Gershon's Corky remains magnetic, undeniable, and forever iconic.

Putting aside the Sapphic eroticism... Bound at its core is an excellent noir thriller that keeps you guessing all the way to the end. It's a gangster film to rival the likes of Scorsese and the rest of the boys club. It happens to follow lesbians, but they're love is complementary to the plot just as a straight romance would be in another noir. The fact that its love story sets it apart and plays into my and many queer folks preferred sensibilities is no doubt a welcomed addition, but it's the suspense of the well- written heist that makes this movie a classic. The ending of Corky and Violet driving away with a successful caper behind them is rewarding both from a plot perspective and as a feel-good moment for all the queer women yearning for happy stories about themselves.

The Wachowskis went on to make The Matrix and thus propelled themselves into riches. They left behind the working-class grit and down-to-earth romance of Bound for grander high-concept sci-fi epics. I don't necessarily want to see a direct sequel to Bound. A spiritual successor would be preferable. It'd be nice to see the fully realizes Wachowskis take what they've learned over the decades and make something more grounded. Lily refused to look backwards and co-direct the upcoming The Matrix Resurrections with her sister. Maybe Lily is looking to go smaller, but not necessarily less ambitious. I'd love to see a modern Wachowski project that navigates gender and class in a real-world setting. Although I appreciate how sci-fi can make weighty critiques on systems more palatable to audiences, it can also obfuscate the message. We've seen how MRAs and the far-right missed the point entirely when they co-opted the idea behind the "red pill." Some time after The Matrix Resurrections, it's going to feel about right for them to tell a thrilling and rewarding story of trans romance set in our own real-world hellscape. Wachowskis gave hope to queer women with Bound in 1996. Perhaps now the world and Wachowskis are ready to explicitly impart hope to transfolk via a modern successor. 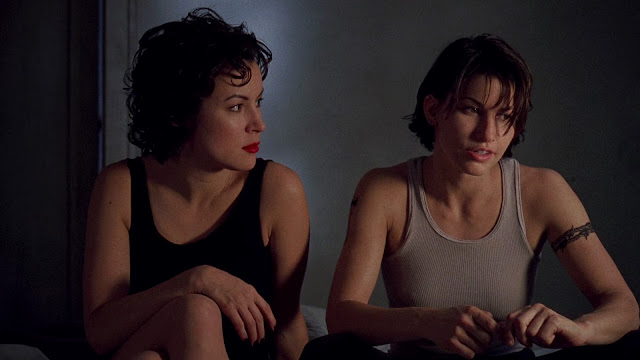