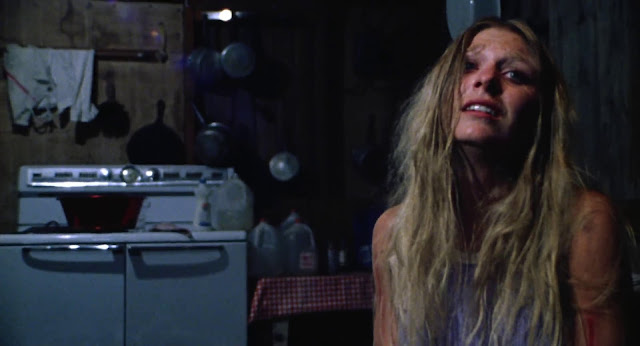 *** beware: this is the film that redefined the slasher genre to be more violent and visceral, though it's actually not too gory ***

When I first saw The Texas Chain Saw Massacre (1974), sometime in my mid-teens, I knew it was a top-tier slasher. I couldn't quite articulate it. Days after finishing it, I still couldn't shake the rush of terror that lingered from its climax. All I knew for sure was that it had the feeling of greatness. Even after some re-watches in the years that followed and today, its thrill-ride feeling remains. Sure, when it comes to onscreen representation and it's technical presentation, its age shows more and more. But you'll have a hard time convincing me that the film's commitment to visceral horror isn't commendable.

The last 30 minutes of the film is an unrelenting barrage of chases and torture for "last girl" Sally Hardesty (Marilyn Burns). Her sustained scream only pauses for brief interludes: when she thinks the gas station is a place of rest and when she faints after Grandpa Sawyer starts sucking her pricked finger. By the way, the imagery of the demented family waking their corpse-like grand father by feeding him the blood of a bound Sally.... well, that's a darkly humorous picture for the ages. I usually can't stand overtly gory and gruesome horror, and thankfully TCM isn't that. Sally's prolonged terror works, because it's mostly suggestive of the torture to come. It's also a justified agony that has been building up slowly since the start.

The first death happens 35 minutes in and it's quick, as are the following. Sally's nightmare, though, is the entree for the viewer and, literally, the main course for the Sawyer family. Thankfully for the sake of my soul, their dinner is cut short as Sally makes a run for it. And once again Leatherface revs his chainsaw as he follows (his brother gleefully slashing at Sally before getting run over) in the climatic final chase. Her screams along with the chainsaw invade the soundscape like a score from hell. The ballad crescendos when Sally transitions into manic laughter as she escapes, all bloody, in the back of a passing pickup truck. The defeated 'Bubba' does that iconic chainsaw dance in the sunset. This ending keeps my heart racing well into the credits every time. I had a similar feeling at the end of Onibaba (1963). Still, the intensity of TCM is unmatched.

This time around I took more notice of the film's social commentary. Early on, Franklin (Sally's paraplegic brother) describes the ways cows are slaughtered. It's a nasty subject the group quickly moves on from, but it serves as foreshadowing for the cannibals they're about to meet, and an intentional connection from the director Tobe Hooper (who stopped eating meat). The commentary on class is more pointed. The first Sawyer member to appear invades the group's van on the road. In a claustrophobic encounter, the hitchhiker laments how the new slaughter tech is costing paying jobs for his family. That's before he cuts Franklin and smears blood on the van's outside, as he is thrown out. The young group, two of which represent the hippie idealism of the time, are forced to interact with the forgotten lower-class. The hitchhiker's behavior reads like an act of frustrated aggression against a class that benefits from his oppression. I wish more slasher films took inspiration from this aspect of TCM.

That said, like in a lot slashers, this movie doesn't do much to dispel the notion that the mentally disabled are to be feared. It would've been nice to see some attention given to the systemic failures that left the Sawyer family in such dire straits. At least, we get paraplegic representation with Franklin. I wonder if the sequels or remakes ever address race. On the gender front, the film chooses to linger longer on the tortured women, while swiftly disposing of male victims. The Texas Chainsaw Massacre isn't ideal for today's standards, but it's place in the upper horror echelon is warranted. If you're interesting in feeling what it's like to be the 'final girl' by way of a sensory experience only the best of cinema can offer, this is the movie to watch.