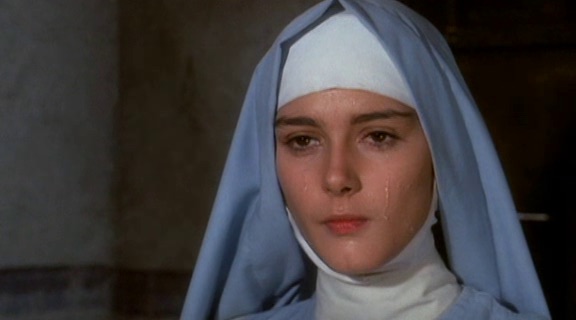 *** beware: this film deals in matters of racism, suicide, and sexual assault, including of minors ***

As a child my bedtime began with diligent prayer. Satan was my biggest fear, and my little heart couldn't bear the threat of hell. My family wasn't even that religious, which goes to show how frightening the Church's word can be for a kid. Our Catholicism was a small part of our Latin American identity. We didn't think to question it. For a time church was a weekly routine, spurred on by family friends. So when we moved away, church didn't stick. By the time I was in high school, I had grown into a passionate atheist. At one point in my early 20s, I kept a picture of a blood-soaked and fully erect Lucifer in my wallet. I had not turned to the dark side. It was just an edgy gesture to spite 'God,' which understandably disturbed my girlfriend at the time (more for the hard-on than the blasphemy). It was a juvenile statement, a more objectionable version of what filmmaker Ken Russell was saying in 1971's The Devils: fuck organized religion and its hypocritical zealots. Though more of a historical drama than exploitation, that's the film that kicked off a rush of nunsploitation in the '70s. You'd think I would've seen a handful of sacrilegious cinema by now. Well... I'm lacking, but I intend to correct this.

I've started with the Mexican horror flick Satánico Pandemonium (aka La Sexorcista, 1975), squarely a nunsploitation film one might see at a grindhouse double feature. It has all the spicy elements you're looking for in a nun flick: self-flagellation, bright red blood, Satanic temptations, taboo sex, and unexpected plot developments. It's bolstered by Cecilia Prezet's lead performance of Sister Maria, in which she fluctuates between good and evil with such ease that it's sometimes hard to see the switch. Enrique Rocha, too, kept me on my toes with his quiet version of the charming Lucifer. The style of the film itself is quiet, featuring probably the least amount of dialog of the movies I've seen thus far this month. Satánico relies more on its dreamy aesthetic, dramatic action, and the emotions in Sister Maria's close-ups.

Before Lucifer's temptations, Sister Maria's convent is nevertheless a place of evil. Early on, director Gilberto Martínez Solares decides to give some screen time to the only two black nuns there. Of course... they are the cooks and servers, and are berated by the racist Mother Superior. Sister Maria, on the other hand, speaks in niceties, even referring to the cow like it were another person. She appears to be the kindest of nuns, but soon reveals the unsettling truth simmering under all the politeness. The nun of color (Veronika Con K. is unnamed, billed as 'Monja de Color') tells Maria that she joined the convent to escape slavery and yet she is still treated the same. Maria offers little solace and basically echoes what many conservatives tell the needy today: don't question God's plan and accept your place.

It gets more chilling when Maria goes full Satan. When she sees the Monja de Color place a noose around her neck, Maria pushes her off her footing with glee. In the end, the suicidal nun appears again, still with the noose, as one of the sisters that stabs Maria. It's a pretty depressing arc for the nuns of color, but at least they get some vengeance. I can appreciate it. Though, Solares wasn't as successful with the queer representation.

The moment one of the nuns professed her love to Maria and started kissing her came as a shock. On one hand, it was nice to have some lesbian representation. On the other, she was coming on too strong, and Maria clearly wasn't into it. Then in the creepiest of power moves, it's revealed that it was Satan all along as he takes the place of the gay nun. The scene is the kind of kinky horror that fits right in with a movie that features Sister Maria punishing herself with a thorny belt. But it also reinforces the notion that lesbianism is deviant and for rapist. That said, I can see how a queer viewer may see themselves in Maria. Cecilia Prezet has an androgynous quality; in at least one scene without her hood, she has the look of a boyish monk.
Which reminds me... The most uncomfortable sequences in the film have to be the moments Sister Maria seduces that young boy. The scenes may have edged too close to exploitation, but luckily didn't get too steamy. I wonder if the actor was of age (there's no info online)... And even though the special effects were low-budget, Maria stabbing that kid was intense. I' sensitive to violence inflicted on children, even if it's in fiction. Anyway, Solares' point comes across. Most everyone now is aware that the Catholic church protects child molesters. Was Solares trying to get the word out via a naughty nun instead of priest?
Turns out it was all a fever dream. The ending came as surprise to me, re-contextualizing all I had seen. Regardless, its themes keep true. In her dream, Maria succeeded in becoming the Mother Superior by killing off anyone who was in the way. She had to keep on the facade of virtuous innocence to get there, just like every other corrupt narcissist in organized religion or any other place of power. Satánico Pandemonium is an elegant takedown of Catholic hypocrisy reveling within a seedy horror flick.

Note: This movie isn't easy to find. I suggest Hoopla.