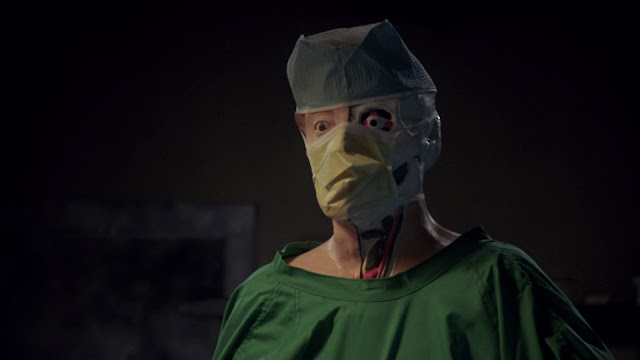 Re-Animator (1985) is not for me. First of all, it takes place among doctors and their gory medical operations. I'm not fond of watching a surgeon demonstrate how to peel back the scalp, cut open the skull, and remove a brain. Maybe because such procedures are down in the real world all the time, I find them more appalling than the images in more fantastical horror movies. You know, if it looks like it won't happen in my world, I can more easily tolerate the gory visuals. Though Re-Animator is a movie about re-animating dead people, so at least most of the icky stuff is obviously sci-fi. Still, I'd be more interested if the revived bodies had more of a personality. Instead they're vessels for the special effects department. It has a lot of gross-out effects, and that's not my bag.

Now if the central characters were more than just one-dimensional, perhaps I would have enjoyed myself more. Dan Cain (Bruce Abbott ) is the most uninteresting male audience stand-in. He has no flaws, nor anything outstanding about him. Jeffrey Combs does well as the mad medical student Herbert West, but plays him with so little empathy and nuance, that it's off-putting to watch as he leads the action and the climax of the film. Barbara Crampton plays Dan's girlfriend Megan Halsey. She doesn't have much to work with, essentially serving as her boyfriend's support and then a wedge between Dan and Herbert and then an abused woman to be rescued.

Apparently, the film is also considered a comedy. While I can see how some scenes are shot with a dark sense of humor, and yeah the re-animated corpses were often silly, I never felt the urge to smile. In fact, some of the extended shots and the slow pacing gave me the impression that the filmmakers wanted the viewers to be more immersed in the world, not giggle from afar. Were we meant to laugh at the evil Dr. Hill raping Megan with his decapitated head? The characters from 1999's American Beauty thought so:

"Did you ever see that movie where the body is walking around carrying its own head and then the head goes down on that babe?" They both laugh and Ricky replies, "Re-Animator."

It all comes off as callous... especially since the film ends with Dan trying to desperately revive the now dead Megan only to cut to credits as he injects her with the re-animator serum. The film is too focused on the spectacle of Herbert West and Dr. Hill to care about giving Megan any respect.

Re-Animator is not for me. 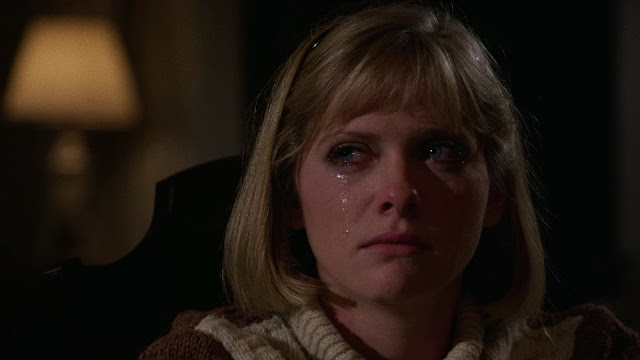