Phantom of the Paradise 🎤 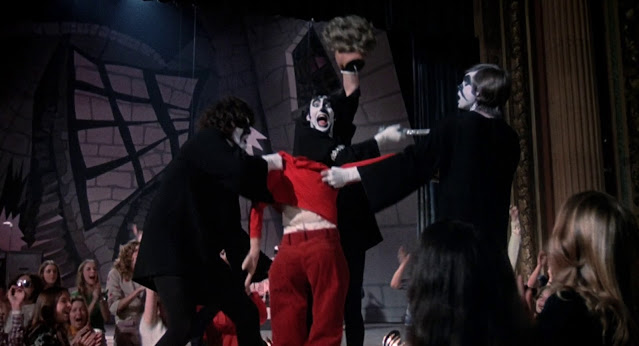 Generally, I'm not a big fan of the Brian de Palma movie. I can appreciate the visual splendor of his earlier works, but his films tend to evoke films without adding much depth. Granted, I haven't seen his more obscure titles. Carrie (1976) is the only one I still revisit. So when I came across images of his rock horror musical Phantom of the Paradise (1974) on the net, I was more interested in it as a comparison to The Rocky Horror Picture Show (1975). The two were billed together as a double features for a time before Rocky Horror rose to its cult status. Despite some aesthetic similarities, they have different vibes. Phantom is an inconsistent experiment, whose structure is less tied to its musical numbers. Rocky Horror is campy feel-good celebration. All in all, I agree with the long running cult following: Rocky Horror is the '70s spooky musical I'd choose to watch on a yearly basis.

There's something to like in Phantom of the Paradise. Paul Williams does fine a job composing the music, and is pretty great as Swan, the evil producer. But no song really sticks out as memorable. Again, particularly as it goes on, the music often feels like an extra flavor to the story and not a defining feature. The most interesting aspect of film is de Palma's deliberate visual flourishes. He goes from long takes to rapid montages, to split screens, to point of view shots, to shots within shots, etc. The pacing is all over the pace. Sometimes it makes for a thrilling unpredictable experience full of fun costumes and characters. Other times... it's a mess.

Jessica Harper is the great to see here, but is underappreciated and underutilized, much like her character is throughout the film. If only Phantom gave her more valuable screen time, instead placing most of the attention on 'the Phantom' and Swan, this might have been a better movie. She's mostly there to make a weak commentary on the pervasive sexual harassment in the industry and to motivate the lead. In reality, the casual sexism through out is never meaningfully grappled with and makes this musical more of a safe space for toxicity.

The dark humor at times relies on old school homophobia. In one scene the straight male lead (Winslow Leach/The Phantom) infiltrates Swan's headquarters by cross dressing and blending in with an all female harem. Swan calls him a 'fag' as he orders the guards to take him away. Outside, now all bloody on the ground, Leach is harassed by cops. "Are you some kind of pervert?" they wonder as they plant drugs and send him off to jail. And so begins his torturous transformation into the phantom of Paradise. Perhaps if Leach were coded as queer, his gruesome transition might have worked as a decent tragic allegory. Instead Gerrit Graham plays the only gay-coded character, Beef, and he plays him as an unflattering stereotype.

Okay. So a lot of older films are problematic. I mean, as I was writing this review I remembered that Frankenfurter sexually assaulted both Janet and Brad in The Rocky Horror Picture Show. And yeah, it uses dated terms, but at least Rocky Horror celebrates its queer characters. There's a line we all have to draw for ourselves when watching older films (and current ones). At a certain point a story beat may tarnish the whole film. Other times we roll our eyes, critique, and focus on the parts that give us some joy. This often happens when we're on the lookout for representation in our entertainment. In regards to the Phantom of the Paradise... I have no interest in seeing that ever again. As for Rocky, I haven't done the time warp in a while. It's about time I take the trip. You think Disney will still allow midnight screenings after Covid is a distant memory?