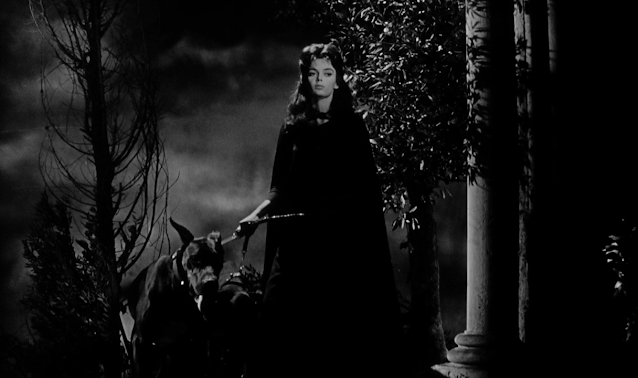 Mario Bava is considered the pioneer of the giallo genre: gruesome Italian thrillers with a focus on murder. Though not quite considered giallo, his gothic horror and directorial debut La Mashera Del Demonio (aka Black Sunday) isn't too far off. The opening scene is of the typical witch burning crusade, but shockingly ends with the executioner hammering a nail ridden mask onto the witch... an iron maiden facial. Seeing the blood spurt out from underneath the mask on impact is sure to make most squirm even today. It was too gruesome for the 1960 American release, and so the bloody hammering was excised in the US theatrical cut. But that's as horrific as the film gets. The rest of the movie follows usual gothic beats.

Black Sunday is only elevated above the standard B-movie by its art direction and Barbara's Steele's arresting presence as both the gentle goth princess and the menacing vampiric witch. The story amounts to a tale embodying the virgin-whore dichotomy without giving either Steele's Asa or Katia much depth beyond the archetype. I optimistically thought the opening was setting up a tragedy and that we would come to see Asa's humanity throughout the film. Nope. She's an evil witch, who has returned for revenge. The movie ends with another burning.

Horror enthusiasts might enjoy themselves with La Mashera, as a historical study, particularly with the cold opening. But besides letting it run in the background during the spooky season, I can't give it a strong recommendation.

This has been day 3 of 31 days of horror. See the full schedule here.