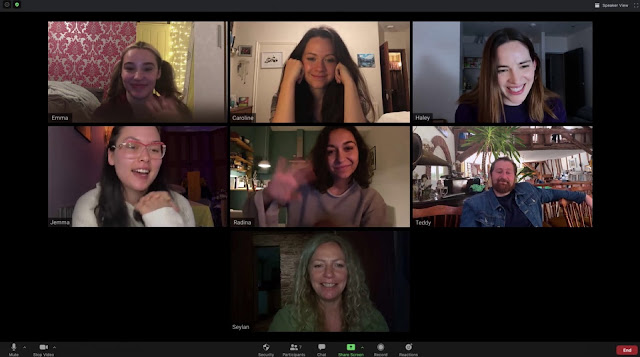 Some time around the release of Paranormal Activity 2 (2010), I feel like most of us began losing interest in the found footage horror film. Nothing has quite lived up to the seminal The Blair Witch Project (1999) as of yet. REC (2007) might have come the closest, but as we moved into the 2010s the technique started feeling like an excuse to cut budgets and it all felt less and less authentic. Due to the proliferation of smartphones and social media, I imagine there's still potential left to be tapped. We are seeing the emergence of the screenlife format, in which the whole story takes place on a computer screen.

Host (2020) is such a film. It all takes place inside a Zoom meeting during last year's COVID lockdown, during which it was shot. The coordination and editing involved in executing a convincing video chat room in Host is impressive indeed. It makes use of Zoom's features for some clever scares, including a spooky use of a face filter. Early on the cast offers a compelling view into a circle of friends, but once the creepiness starts ramping up it all becomes less convincing.

When they start moving their cameras around it starts to feel contrived. I didn't buy that the sobbing one would investigate the attic all by herself. The way another slowly walks down the hall comes off as intentionally suspenseful. During one participant's haunting the others would watch along much too passively, as if they were watching a movie and not genuinely afraid for their friend's life.

Host may end up being persuasive enough for some viewers, but for me it couldn't keep up its facade. It could be that the screenlife format, and confining itself to a video chat, is inherently more difficult to pull off than the standard found footage or mockumentary format. I mean, yeah, it's limiting to convey authentic terror when your characters are mostly sitting statically in front of their computers or phones. But, hey, if Host doesn't work for you, look at it positively: it's only 56 minutes of your life.