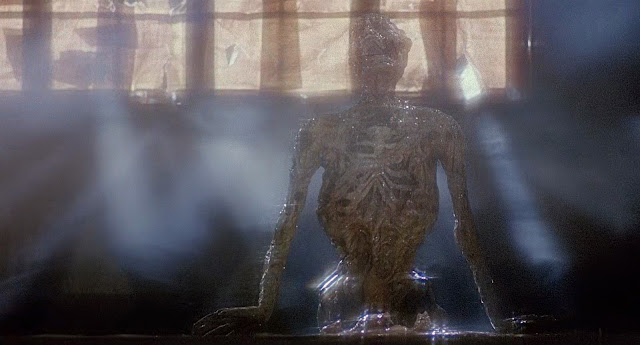 Despite their limitations, I still enjoy watching well-executed practical effects from the '80s. It's true that the tactile element of such effects keeps them more grounded than their cg counter parts of future decades, but I'm most giddy to see what human hands are capable of.  The rise and formation of the 'skinless' man in Clive Barker's Hellraiser (1987) may be the most impressive human crafted effect I've seen in a horror film. All the art direction in Hellraiser is great, in fact. From the mysterious puzzle box, to the design of the Cenobites, it all stands apart as a unique vision among the plethora of slasher films at the time. Admittedly, some of the creatures look a bit silly for today's standards. I did notice wheels attached to the monster chasing Kirsty down that hallway in a few frames. Overall, the designs were effectively creepy.  Though there was plenty of gore, the thing that irked me the most was the two close up shots of the very real roaches. It's a personal phobia, but I doubt it's uncommon. So please horror filmmakers, never make a scary movie about roaches.

As for the story,  I enjoyed the early conflict and mystery, before the Cenobites showed more of themselves. The plot of the skinless man pleading Julia to kill so he can use the spilled blood to become whole once again is the chilling kind of tale you'd find a good short story anthology. Clare Higgins as Julia Cotton gives an outstanding performance as the conflicted adulteress. Higgins really makes you feel the weight of her murderous choices and the script does a good job of making the audience empathize. When she brings home her first victim, Julia is visibly uncomfortable as the kissing starts. But when the man has an outburst of violent aggression, Julia and the viewer are surely on the same page: maybe it's not so bad for this guy to die. It's a bit troubling that Julia is yet another female character that is manipulated by an abusive man. But, again, I think Higgins pulls off a credibly disturbed persona, at least in the beginning. It's unfortunate that in the climax, she loses her nuance and is consumed by the madness, at which point Frank (no longer skinless) easily betrays and kills her. 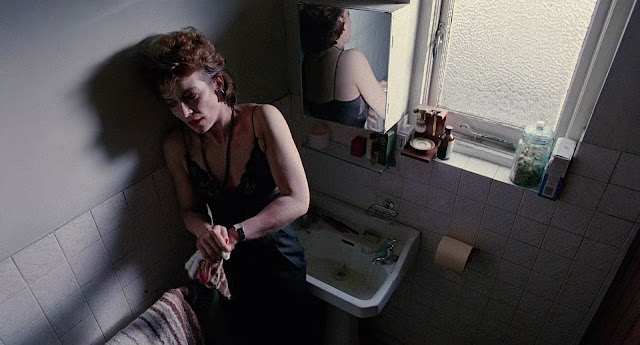 Once Kirsty (Ashley Laurence) begins to take center stage, the narrative becomes all too familiar. Her character arc seemed a little too one-noted compared to the trouble of Julia and Frank. The little romance Kirsty had, in particular, felt cheesy and superfluous, as if only there to please a marketing team. Her interaction and defeat of the Cenobites felt rushed, too. How exactly did she figure out how to banish them at the perfect moment? Suddenly these otherworldly kinksters felt a lot less threatening. Then at the end the "menacing" homeless guy turns into a dragon skeleton and flies away with the 'box.' It leaned too much into fantasy in the end there. And I hate it when movies use "the homeless" to creep out their leads and then don't address the systems that disempower the lower class.

Nevertheless, Hellraiser's world building was interesting enough that I starting watching the sequel soon after. I've seen about 30 minutes so far, but it looks like Hellbound: Hellraiser II is interested in Kirsty's trauma and fleshing-out her character, and also brings back Julia as the new "skinless" character. This all bodes well for the series, but that leaves Hellraiser feeling incomplete as a stand-alone experience.

I have a feeling, based only on physics, that the franchise wont be able to keep up its momentum all the way through its 10-film run. Though that upcoming reboot shows promise. You had me at: Jamie Clayton as Pinhead. 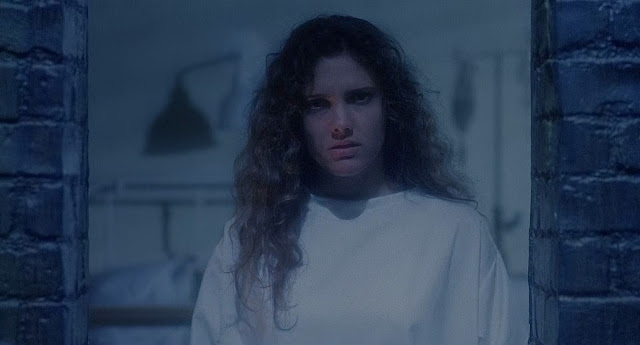