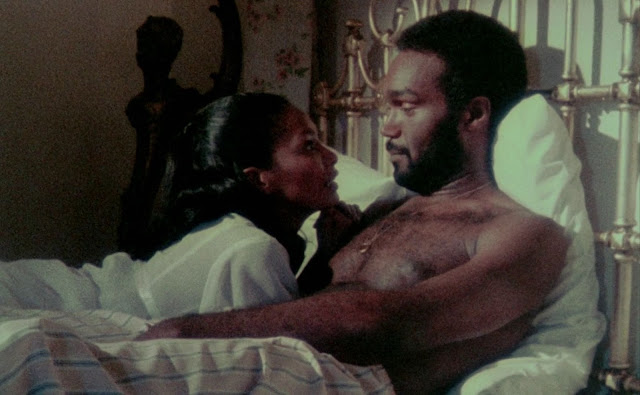 Today's film, Ganja & Hess (1973), is a unique vampire film, altogether different from yesterday's campy Daughters of Darkness. The vampires of Ganja & Hess are not the typical white specters out to enchant their prey. Writer/Director Bill Gunn instead relates the bloodthirsty to his own experience as a black man in America. The wealthy black anthropologist Dr. Hess Green (Duane Jones) is the featured vampire.

The mythology behind this story's monster originates in the fictitious and ancient African nation of Myrthia, a place were they to drank human blood in a pursuit for immortality. Hess turns when his assistant (George Meda, played by Gunn himself) stabs him with a Mythrian ritual dagger. As a blood drinker, Hess doesn't sprout fangs or become insensitive to the sun. But he is apparently unable to die or be killed. The price: crave blood like a drug.

*** spoilers and talk of suicide and racism ahead ***

The reverend at the local black church and Dr. Hess's part-time chauffeur describes the doctor's affliction as an addiction. "He's not a criminal. He's a victim." It's a cry that has echoed for too long. Hess is aware that his wealth will only get him so far. When Meda talks of his suicidal thoughts, Hess explains that as the sole black person on the block, he is sure to be harassed by the police if Meda's dead body turns up in the neighborhood. Meda kills himself anyway, and so, of course, Hess hides the body in the freezer. But not before feeding on the spilled blood.

What Bill Gunn seems to really wants to explore in Ganja & Hess are the pitfalls of assimilation in an unequal society. Hess is living the life of the typical rich white imperialist, collecting pillaged art, as he isolates himself from his community in a big empty house. It's no coincidence that his servants and prey are all lower class black people. The vampire in this story is the creature the white man will tolerate: another version of themselves who feeds on their lowly. This is made even more clear when Ganja arrives.

Ganja Meda (Marlene Clark) brings energy to the house, which makes for a fun dynamic between her and the brooding Hess. Her attitude is also crueler, more representative of the egotistic 20th century vamp. She revels in being "superior" as she commands and mistreats the obliging butler. "I'm that evil," she proclaims early on. It's no wonder she quickly forgives Hess for hiding her husband's death from her and then agrees to become a vampire herself. Their romance is the most alluring part of the film. It was easy for me to forget the cost, as I watched the loving couple. That's the was the point, I think. Hess and Ganja's romance is all rainbows when you ignore the horror. But it doesn't last long.

In the end, Hess decides to rid the curse by cleansing his spirit. In my eye, when he goes to church to find the light, it isn't so much about finding Jesus. It's about him connecting with the people he has long forgotten. He gains his humanity (and thus dies) by caring for humanity, instead of just looking out for his and Ganja's own self-interest. Sadly, Ganja doesn't do the same. The final scene is surreal (like a lot of the film), but whether in world or not, the dead butler and the naked man (a rebound lover) running towards Ganja suggests to me that she is detaching herself further from humanity.

The whole film is highly experimental. I adore how it's all over the place. Some character moments had a documentary authenticity to them, while other scenes were reminiscent of onstage monologues. There are clever shots that linger just long enough to show an actor change their expression. Then there are the dreamlike scenes and its unconventional structure that keep this film beyond its time and refreshing today. It's a shame Hollywood wasn't ready to support artists like Bill Gunn or Duane Jones or Marelene Clark at time. Hell, a movie like this wouldn't gain their attention today either.