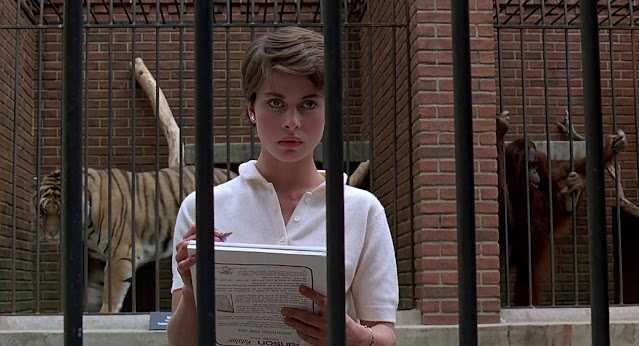 You'd think that in a world fascinated with cats like ours, there'd be more werecat media to go around. Maybe 2019's widely-panned Cats has already squashed my dreams of the werecat taking over the werewolf in pop-culture. The regrettable Wonder Woman '84 certainly didn't do any favors for Cheetah. Damn. I'll have to look to the past for the time being: like Paul Schrader's 1982 remake of Cat People.

*** beware: this film deals with incest and this review includes discussions of exploitation in the industry***

The structure of the story didn't work for me. It began well enough with Irena (Nastassja Kinski) arriving in New Orleans to meet up with her estranged brother Paul (Malcolm McDowell ).  It sets up an intriguing family mystery and McDowell, as expected, plays a properly creepy brother. But in the middle of the film the murder mystery and family drama ends prematurely with Paul's death. The narrative then focuses on Irena's romance with Oliver (John Heard), which I never bought or was much interested in... beyond hoping Irena would eat him as a panther. If you're going to make an erotic thriller, you better make the romance engaging. Schrader and John Heard fail at making Oliver more than a boring male-fantasy template. To put it simply: the film over stays its welcome. The final sex scene looked like it was at least going to lean into the kinky cat body horror, but no... It was a quick and standard missionary scene with rope. Imagine if Irena had been half cat/half human during the climactic love scene. It would've been bonkers and might've made the whole movie worth it.

The whole cat people mythology was a miss, too. Paul explains to Irena that in order to keep from transforming into a cat during sex, the fucking must be done with ones own. It's an incest twist that's rightfully creepy, but it feels like a lurid addition. And with the death of Paul, it's a major theme that's hastily forgotten nor properly addressed.

The film doesn't seem to be interested in anything that isn't sexy or lethal. The woman (Ruby Dee) that lives with Paul, for example, is barely considered. She's an older black woman who feels too close to a stereotype and isn't even given a proper name. Her orphanage wrote 'Female' on her birth certificate and the woman who raised her pronounced it like tamale: Fe-ma-le. That's the most we get of her back story, though it's implied that she covers up for Paul's murderous secret. When, get this, Irena calls the cops, fearing her brother's wrath, a K9 unit happens to come. The dog sniffs out Paul's secret lair from within the cop car and so they search the place. Who's cuffed and taken to jail? Female. We later see Female at jail just to give Irena an ominous "magical negro" warning. I must say this: cop dogs give false positives 80% of the time and the police abuse this over and over again. Female's tiny plot line turned into racist copaganda bullshit, whether Schrader was ignorant of it or not.

Behind the scenes, I'm not sure things were great either. The media had an obsession with Nastassja Kinski's love affairs back then. Rumors circulated that she had slept with many top directors, including the child rapist Polanski when she was 15. Though she rejects such rumors in this Guardian piece and defends Polanski. She supposdely slept with Schrader himself while filming Cat People. She has been quoted as saying “Paul, I always fuck my directors. And with you, it was hard.” But in a humorous Letterman interview she denies that she sleeps with her directors. The Guardian article notes that she was proud of Cat People. But in an interview by Jodie Foster she called the experience slick and manipulative (sourced in Wikipedia, but I haven't been able to see article). It's all murky. Still, in '97 Kinski said to W that she felt exploited by the industry in her early career: "If I had had somebody to protect me or if I had felt more secure about myself, I would not have accepted certain things. Nudity things. And inside it was just tearing me apart." I'm sure one of the moments she was referring to was her nude scene in To The Devil a Daughter at age 14. She might also be thinking about her performances as an adult, about her work in a 'sexy' film like Cat People. Look, I don't know every detail, but all this info is worth mentioning.