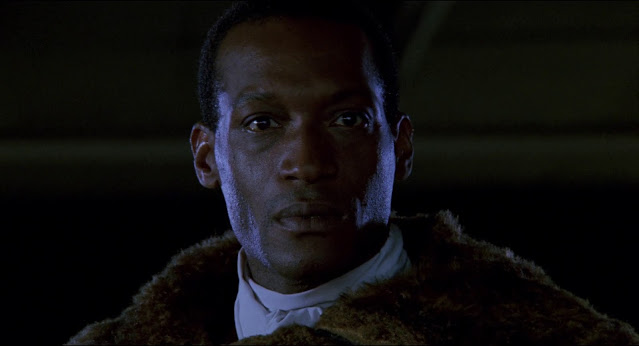 ... and so we continue today with another Clive Barker story: Candyman (1992). Well, it's an adaptation of his short story "The Forbidden". This time it's directed by Bernard Rose, who makes the bold decision to change the story's setting from Liverpool to Chicago and establishes Candyman (Tony Todd) as a black man. In the film, the ghoul who haunts the Cabrini–Green Homes (public housing) as "Candyman" was lynched (tortured to death with honey bees) long ago for a love affair with a wealthy white man's daughter. In 1992, it was the most serious take on race in mainstream American horror since... probably the tension in Night of the Living Dead (1968). Of course, it's still a tale told from the perspective of whiteness, as it centers on graduate student Helen Lyle (Virginia Madsen).

The film is aware that it's about privileged whiteness invading oppressed black spaces. I mean, it acknowledges it. Early on Helen alludes to her own complicity in gentrification. She explains to her thesis partner Bernadette (Kasi Lemmons) that the apartment building she lives in was once for low-income communities and then renovated to appeal to people like herself. Later on after being attacked at Cabrini-Green, Helen points out to Bernadette that the police only came to her rescue because she was a white woman. Bernadette is a light-skinned black woman, by the way. If the filmmakers wanted to hit harder, they could've given Bernadette more of a focus. It's unfortunate that we don't get much insight on her inner turmoil. Bernie is little more than the black best friend. 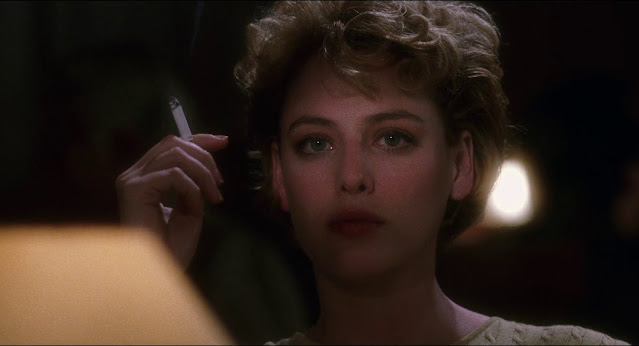 The camera is more enamored with its icy blonde, Helen. Virginia Madsen does well as the naive yet driven grad student and then the besmirched escapee framed for murder by a ghost. Though I don't think the film did enough to set her up as a martyr for Cabrini-Green. The moment she crawled out of the pyre with the baby and left Candyman to burn was supposed to come off as a triumphant event, but I could only see it as the performative gesture of a white savior archetype. Sure, I'd buy it if it was only the mother and that kid showing up at Helen's funeral. But the whole community? That's a pat on the back. Killing the boogie man is a nice metaphor, but even in the world of Candyman it's is just a band-aid echoing calls to heavily police marginalized people. Taking a murderer off the street does not address the systemic problem. In fact, in the years following Candyman's release, residents of the real world Cabrini-Green have faced displacement as old buildings get demolished to make room for upper-scale apartments.

In the twist ending, with Candyman presumably gone, it's now Helen Lyle who has come back to haunt the living. Because she gentrifies in death, too (i.e. she displaced Candyman himself). Now, I know Helen represents or is the reincarnation of Candyman's love, and so that's why the movie is so focused on her. That doesn't really excuse the story's white savior obsession. A better ending which advocates for interracial harmony might've kept Candyman and Helen together in the afterlife, as a duo of vengeful spirits who haunt the gentrifiers and their accomplices.

As a horror thriller, Candyman is up there with the best. Tony Todd is so good at channeling an intoxicating and foreboding presence. I hope he has more screen time in the sequels. Rose, too, knows how to hypnotize his audience with his camera. And despite giving Helen a lot of grief in this review, I can't deny that Madsen delivers a thrilling performer here. It's just that the film bites a bit more than it can chew. Maybe that's better than not biting at all. Maybe it's to be expected from a story never meant to be about race. Maybe Nia DaCosta has course corrected in the 2021 version. 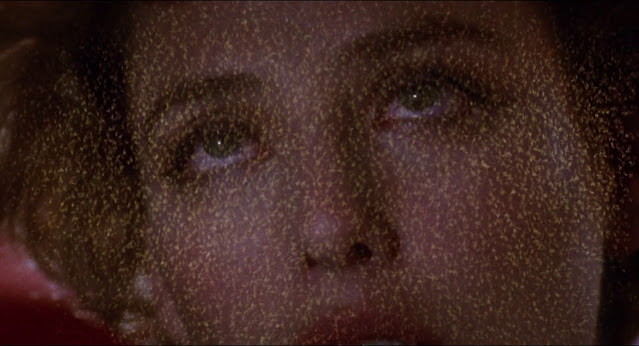