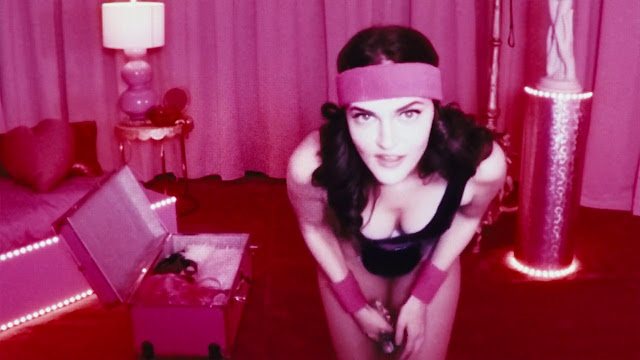 The allure of getting into online sex work is pretty strong these day. We're still dealing with Covid and that damn capitalism, so the idea of making money from the safety of your room is undoubtedly a tempting one. A lot of us considered it before the virus, if we weren't already engaged in it. The unfortunate reality is that to make a decent living in the sex biz, you're best bet is to embody the popular standard for beauty and cater to those with the money: white hetero men. Meaning, femme white (passing) women still have the advantage when it comes to getting views. Camwork may be more liberating than the typical service or desk job, but most online sex workers are still subordinate to the platforms they post their content on. Whether it's a camsite or Onlyfans, the site owner's main concern is to grow their paying user base. The workers are as expendable as they are in any corporate enterprise. As long as there are people desperate for money, there will be someone to take your place. Sex work is more precarious because banks get nervous when dealing with sex. The ever changing terms of services of social media platforms threaten visibility, too. So even if you gain some independence online, making it as sex worker is a constant struggle.

It's all worth watching for Brewer's strong performance as Alice, Lola, and the digital Lola. But I would've liked to have seen more from the other camgirls. Even a glimpse of how others are dealing with their stolen accounts would've added a broader perspective. Casting Imani Hakim as FGL's number one whiffed like a bit of tokenism, as a way to set aside racism in the industry instead of confronting it.

Since adult site owners have a history of shady business practices and with today's emerging deepfake tech, I suspected the people behind FreeGirlLive were actively using an artificial intelligence to copy and replace its workers with fakes. But because CAM isn't so interested in the 'how' or 'why,' the digital thief could easily be interpreted as a rogue a.i. or a supernatural internet entity. It's certainly an unsettling and unique horror villain of the information age. It also could've been much more.

Alice's solution to ending her nightmare was ingenious and bold, for sure. The Black Widow writers must've been inspired by that nose-break. But it was an individualistic solution. She got digital Lola to delete herself. That's cool. What about Baby's account and every other camworker that had their identity stolen? Alice and the movie don't seem worried about it. In the end, Alice (with a broken nose) goes back to square one and starts a new account with a new name. I'd be afraid that it'll happen again. Nothing really changes. FGL continues as always and Alice will keep struggling for their benefit. This was an extremely depressing ending for me. Maybe the filmmakers intentions were that Alice, in fact, killed the digital foe once and for all and meant for the final moments to be empowering.

Well, here's my idea for an empowering ending: Alice and her colleagues organize to take down the copycat a.i. and FGL with it. Then they start their own co-operative platform where they can produce sexy content on their own terms. It could be a space for sex workers to make a healthy living without the need of exploitative bosses. Did you know that sex workers are trying to do just that in real life? Check out Peep.me, and listen to this episode of Season of the Bitch for more info: Worker Owned Erotica.